Where do I begin?

The Top 10 Video Games of All Time

Red Dead Redemption II placed #10. Out of all of these nostalgic games and a few, merhaps controversial, modern  games thrown in there as well. But this was written before I’d dedicated several hundred hours playing Red Dead Online.

I’ve said before, the top 10 video ga,es rambling wont be redone this year since it’s so recent. However, I would absolutle swap #10 and #6. That’s the only change I’d make to that list. So. There you go.

Another thing to take from that rambling I wrote in 2020, is the fact that my favorite video game of all time, is… and more than likely will alway be…

Two out of the 10 games in the list were developed by Rockstar Games. Hell, two more were listed in the honorable mentions.

Since 2018 when Red Dead Redemption II was released, things have changed at Rockstar. Numberous high ranking individuels, including Dan Houser, have left the company.

The company has gone from some of the best video games I’ve ever played.

To this. Released last year.

RANDOMISH SIDENOTE: It was Modest Pelican there that inspired me enough to do SOMETHING and thus, I started streaming. If you, ever… SOMEHOW, read this, Thanks, Geoff!

So. I start playing Red Dead Online. I start streaming Red Dead Online. I meat some amazing, fun and chill people that I’m glad to call my friends. This is at the tail end of 2020. After Rockstar had put out their last REAL updates (“Blood Money” would follow, of course but that hardly counts as a “REAL” update).

Be all of that as it may.

The week after Blood Money was released for RDO, GTAO received the “Los Santos Tuners” DLC. Which included new properties to purchase and… if I’m not mistaken that’s where the whole Car Meet and the races to win the car bullshit thing was introduced. GTA Online also received DLC featuring DR. FUCKING. DRE. later in the year.

This upcoming Wednesday will be the one year anniversary of Blood Money being released.

On July 7, 2022. Rockstar published these paragraphs in their newswire: 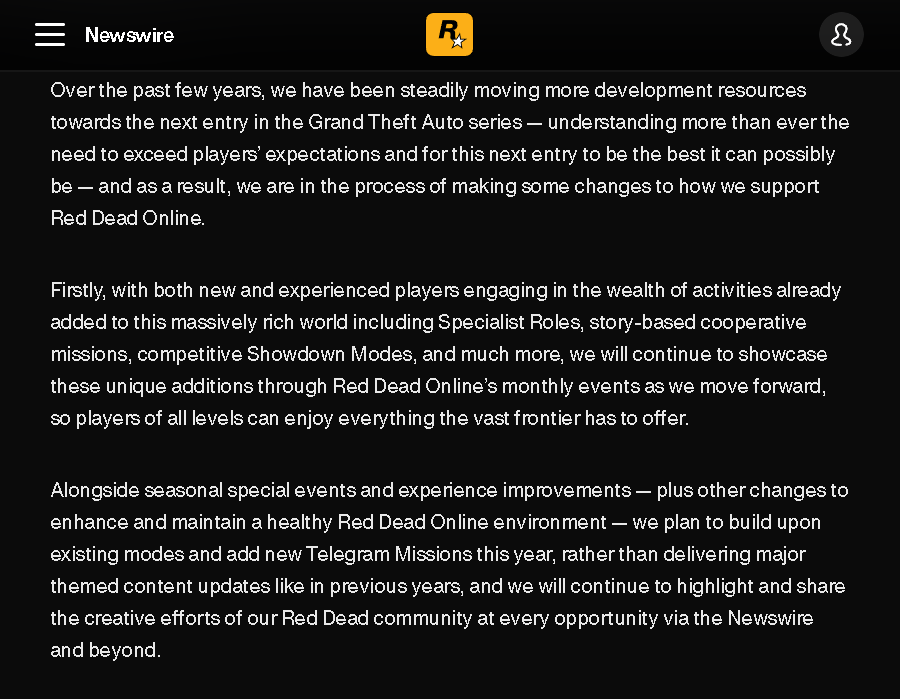 There isn’t one of these big enough to do justice.

Red Dead Online has been abandonned by Rockstar Games. For no reason other than greed.

As such, I will not be buying GTA VI. This will be the first game in the series to not have my support. Excluding the handheld games, anyways. Rockstar could throw in a personal stripper and hooker for me included with the purchase of the game. I won’t buy it. No matter what the game ends up being, I’m not going to buy it. Full stop.

Not if Red Dead remains abandoned.

Easily put, Rockstar won’t receive another penny from me.

Shit dude, I don’t even want to ever stream GTAO ever again. Why give that generally fun but severely overrated game ANY drop of publicity when the obviously superior RDO deserves so much more? You know? Something like that. I dunno .

I’m just gutted. Heartbroken. And all sorts of disappointed. Rockstar has been the cause of so many great memories for me. Now, they’re just EA.