What’s there to say right?

Once upon a 2013 or so. I lost my shit over Ben Affleck being cast as Batmann. I called for congressional hearings to discover who, officially, decided to cast Ben Affleck as Batman and have that person brought up with charges of ccrimes against humanity. I did tis on… it was probably called The Drunken Radio Show at that point.

Shortly after discovering that Ashley Massaro, randomly, passed away…

I opened the Facebook app on my phone, which is pretty abnormal for me. I mean. When I’m home and just… being me… or whatever? I MAYBE open it once a day. But I’m out and and about at this point. So. Yeah. Openeing Facebook is, kinda a regular thing. I mean, it’s through a random scroll-through and Mick Foley’s posting about how he wished he and Ashley Massaro had gotten together with the kids that I discover that she had randomly died.

A human being, on earth, that I’ve never… personally met… but can say I love… posts…

Michael Keaton was going against his typecast when he was cast as Batman in… whenever it was his announced casting took place. The internet that didn’t exist )outside of Al Gore’s mind, of course) blew up about his casting. And. I mean. I was, like 8-years-old… the first time I was ever CRITICAL~! about anything, ever. When I had learned that Georgle Clooney was to play the good ole’ capd crusader and I said to my mom, who told me the news, “What is Dr. Green going to be Robin?”

So… I’m sure the virginity of the internet was ablaze about that and such. And. Whatever. Ribhgt?

Merhaps, I shoul’ve learned my lesson. When Heath Ledger was cast as Joker. And I… internetally lost my shit over it (for… about six hours, tops… but that story’s been well-documented at this poit). And. You know. I just went over the whole “Batfleck,” “controversy” 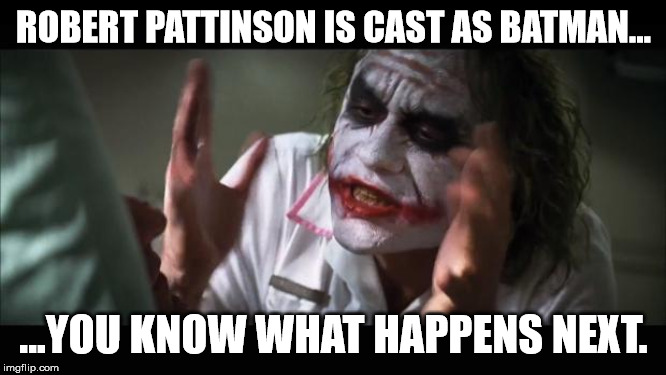 I’m Batman facepalming all over the place. No question.

But. Given that Batfleck proved to be ONE of the best Batmen-on-film of all time? Yeah dude. I’ma be patient. See what happens. I’ma wait and see how Edward sparkles in the Batsuit. I’ma wait for trailers to see how he performs… or… i guess… “detects” in the Batcave. I’ll not lose my mind. Like everyone. Will I Batman facepalm? Of course. Obviously. But I’m not going to lose my mind over this. THis time. I’ll just wait and see how this… new… shiny knight )out of respect to adam West, I’;; reserve myself from calling him a bright knight for now) turns out.

And… I mean… don’t get me started on this weirdly awesome… elseworlds Joker movie that’s about to happen in a couple of months.

But in the grand scheme of things?