First thing’s first. Lemme lead with my mistakes. Glenn Beck style. Or something.

Abby isn’t transgendered. I called her such, in my written review. And said as much in my “podcast” review, thing that’s GOING to happen. But. I mean. I also said, “It’s NEVER DIRECTLY said in-game that she IS trans.” Because. You know. I figured that, this apparent, “wokeness” that Neil Druckmann was going for would never acknowledge such a transphobicblahbididdyblah. Right? Like. Neil Druckmann, the simp for Anita Sarkeesiand that he is, would never EXPLICITLY say, in game, Abby is M2F trans.

She’s Chyna. Like. Late-96-late-97, Chyna. Before, even, the breast enhancement surgery, Chyna.

RANDOM SIDENOTE: Where’s Ernie when you NEED him?!

Point is. Abby]s not transgendered. I mean. Laura Bailey played her. If Abby was M2F trans, for sure, Neil would’ve hired a M2F trans woman to play her. Because, obvious, woke. Things. Happening.

My belief that she’s trans began when I heard rumblings of “IT’S MA’AM” becoming a meme about the leaked spoilers of the game that happened in like March or April. Right? So. I hear that there’s rumblings about some dumb ass trans message-y thing happening. And. I begin to think about this. And I begin to think that, the only, logical reason for anyone to be pissed about transgendereedness things inb the game would be if Ellie comes out as M2F Trans. Right?

So. I asked a friend of mine, that doesn’t give a shit about the game(s), at all, to google the spoilers and I asked her if the spoilers revealed that Ellie is trans.

She, my friend, told me that Ellie isn’t trans. But people are upset about, “This Abby chick.”

Abby is trans is Inceptioned into my head and lives there.

But I mean. Apparently, it was a big thing during the whole “leaked spoikersL:. “Abby is trans.” Was a spoiler and shit. Apparently. But nah. Bruh.

Here’s a, decent enough, discussion about the topic on a gaming forum. GameFAQs, to be exact.

So. Uh… That’s the intro to this rambling.

If you watch this, and understand the lingo…
I’m getting SO MANY… A.P.A. vibes…

Dude. Now I feel like I NEED to play the game again. Now thst this stupidness has been cleared up for me. And I mean, admitedly, it’s stupidness on my part for having ANY sort of semblence of Abby being trans affecting how I felt about the game. In my defense. I mean. Niel Druckmann and co. throw in this forced line from Abby to Lev (the actual trans character)… a line that… legit… makes even less sense now that I know that Abby isn’t trans.

Abby says to Lev, in the midst of all of this fighting and war between their two factions, “YOU’RE! MY PEOPLE!” So. Abby isn’t trans. She just. Really, REALLY doesn’t care about the WLF as one would believe and such. THUS…. I… NEED to play the game again. Right?

Dude. The other day/yesterday/however time wors… I was wartching a bunch of reviews of TLOUPII on Youtuve. From small Youtuveers I’ve never heard of. And like… one that I’ve seen like, merhaps, in total, combined, one and a half videos from. Blah. Point is. I was looking into reviews and such.

THE ONLY review that I came across that liked playing as Abby and shit. He maded a couple of good points. Specifically, “If you hate Abby but loved Joel in the first game, you’re kinda a hypocrite.” Wgich. I mean… touche. But. I mean. No thanks. Please?

Then you know. I watched the obligitory “this is feminism, the game!” Reviewer. Which. I mean. I dunno if he even played the game. But. He did come up with some pretty damn good alternatives to the story than the one we got. Like. You start the game as Abby. For instance. I mean. He never suggested killing Joel as Abby or anything, in fact, I’m sure Joel’s alive and well in all of that one dude’s suggested retellings.

Amd/ I mean… lemme just stress, cause I don’t think I did when I wrote the review last week. I don’t like that Joel died in the manner that he did. For me, it was and is like, “Oof. Garsh darn it. I didn’t want that to happen!” It didn’t RUIN the game for me. Nor did it, retroactively, ruin the last game or anything (the gameplay mechanics in this game did that AYOOOOO~!)

The Last of Us Part II is such an emotionally devastating game. As was The Last of Us, the first game, right?

There was this one time, I’m wandering around Seatlle with Dina. And I’m wondering, how many bullets do I have? Then… this happens.

So… I noticed that my knife left a precise mark on the wall where I stuck it. So I proceeded to strike the wall some more to create more knife marks.
Then. I notced that sign there. It reads, “Flamable” an such. So. THen. I go to town. Trying to make a spark and fucking besplode (no typo)_ this  building. To no avail, sadly.

Just. An awesome piece of detail that like 90$% of players will never know exists. Right?

Finally. I’ll just end with this last video. Cause. I’m pretty sure I nailed all of the things I needed to say. So.

I found myself, randomly having fun in a mirror for almost a minute. But. I mean… According to Mr. Druckmann. Such wiseness… 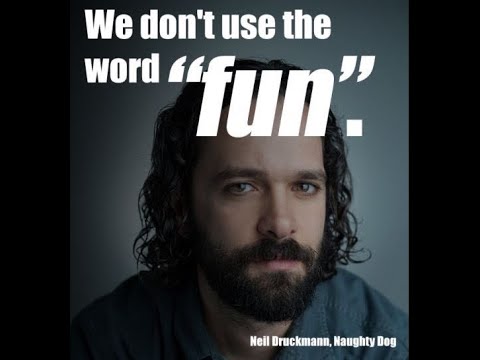 But. Legit. The gameplay. IS fun. So.

Or… should I say…

I’m no one. I’m just you’re humble drunkard from afar.