I am a self-proclaimed Batman expert. Challenge me on this whenever you wish on Harms’ Way. It’s been a while since I’ve done any sort of rambling about the greatest inspiration/love of my life (Batman, obviously). And so. I figured, I may as well do a little something on, arguably, DC’s most popular character of late.

Her name. Is Harley Quinn.

Harley Quinn is, EASILY DC’s most popular character these days. Just for a quick, easy, (possibly lame) argument: the casting of her character on the silver screen hasn’t been met with uproar. Hell. I haven’t heard of a SINGLE argument against Margot Robbie’s casting in the upcoming Suicide Squad movie.

Again. That’s just a lame. Easy argument to suggest just how popular this character is.

But what I want to ask right now is: What is the genesis of this character’s popularity? Where did the popularity come from? Why is Harley Quinn held in such high regard? And of course: Why should this character be popular, at all? But, I probably won’t ask any of these things, really.

Aside from the “usual” vixens included in Batman’s “rogue’s gallery.” Throw at me any Catwoman or Poison Ivy or Talia al Ghul or anyone else that you want to… Harley is in a place of her own. Period.

Unlike those three other vixens mentioned, Harley’s affection isn’t directed toward The Dark Knight. Rather, her attention SOLELY belongs to the Joker.

If you’ve lived under a rock for the past 75-ish years, the Joker is Batman’s arch-nemesis. The Joker is the complete antithesis of Batman’s character. Completely. The best viewing of this relationship? Well. Obviously. It comes from RyansDrunk.com’s Best. Movie. Ever… The Dark Knight.

All of that aside, you’ll eventually discover the awesomeness that is the character, Harley Quinn.

Harley was created, pretty much, by Paul Dini for Batman – The Animated Series. You know. That amazing 90’s Batman cartoon show. That EVEN YOU watched. Her first appearance was seen in the episode, “Joker’s Favor.” And. A legend was born.

Harley has since grown into a life of her own, these days. It’s kind of odd. It’s the sort of thing that makes one scratch their head. Her popularity should question the very existence of life between the sexes. I mean, as far as her character is concerned. You know?

I mean, at her ABSOLUTE CORE, Harley Quinn is a victim of domestic violence. As many times as Joker may slap her across the face, kick her out of the super, secret hideout or what have you… she ALWAYS crawls back to him. Granted, this is more a tool to expose even further (as if it’s needed) how evil a bastard Joker truly is. But… Like. Really. That’s Harley’s character. Throughout every story relating to the two of them… the common factor is: Joker abuses Harley.

At the same time, Harley is EVER devoted to him.

As a heterosexual male. You know. Living in 2015 America. That just tells me that… no matter how big of a dick I may be towards my love interest… she’ll just be accepting of me. No matter what. Every female that is affectionate towards me should, UNDOUBTEDLY be loyal to me. Period. The end. SHARIAH LAW~!

But. Again. Obviously. Joker’s just a dick. Period. A psychotic. Absolute. Dick. Period. So. It’s no secret that Harley’s completely under his spell. In that sense, this relationship makes total sense.

But then… I guess, the question comes to… Harley’s recent popularity. In my mind? Undoubtedly, it spawns from the popularity of the recent-ish Batman video games. You know. Arkham Asylum and Arkham City. In both of those, Harley plays a pretty significant role. And thus. MEGA POPULARITY~!

But. Me being me. I delve deeper. In my innermost thoughts, I’ve come to the conclusion that well… Harley Quinn is similar to a fictional character of MUCH less renown.

If you’re some sort of lame, frat boy idiot, person that has watched Fight Club ONLY one time, I’m sure you’re asking “WHAT IS THE MEANING OF THIS?!” But. Seriously. In the movie (and book) Fight Club, Marla Singer is the most important character. 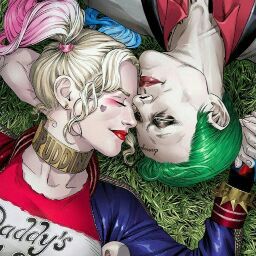 Without Marla Singer the “Jack”/”Narrator” person, he never goes insane. He never develops another personality. Fight Club, itself, never happens. None of the mayhem caused by Project Mayhem ensues. And… basically… without Marla Singer, Fight Club becomes Office Space but even less relevant.

All the while. Throughout ALL of the mayhem, Marla Singer is just someone that is looking for love. She is THE most abused character in Fight Club. Although no physical harm comes to her. Sure, “Angel Face” gets his face pounded in, but… his punishment doesn’t come NEAR Marla’s.

Marla has to endure, seemingly daily, that her lover denies their love. Yet, she continuously decides to come back to him. And they’re involved in some sort of bizarre love triangle thing of awesomeness (as far as story telling is concerned).

Harley Quinn? She’s the exact same character in that regard. In… you know… a sense.

Dr. Harleen Quinzel, she was just looking to evaluate her first case after gaining a job at Arkham Asylum. That case ended up manipulating her beyond all belief. And… one, two, skip a few, ninety-nine… HARLEY QUINN!

In a predominately male oriented comic fan base, Harley Quinn, I guess you could say, is the ultimate lover. No matter all of your faults, she’ll come crawling back to you. Just like Marla Singer came crawling back to “The Narrator.”

And… I guess… that’s something most males are proud of? Apparently? I’m not sure why it would be. But. YAY MASCULINITY~!

From a female’s perspective, I’d just say: I feel your pain, sister. Guys are dicks. Period. Perhaps this sentiment is better explained by Trey Parker/Matt Stone.

Either way. No matter the psychological evaluation you may give the character, Harley Quinn is just… amazing. No matter the medium you’ve experienced Harley. Be it in Batman – The Animated Series, or the Arkham games. Or… hell… maybe you’re reading this after 2016’s Suicide Squad had been released.

Harley Quinn is an amazing character. Period. For all she endures. For all she puts up with. She is a character that should be looked upon with awe.

One thought on “The Amazing Character That is Harley Quinn”