An thus begins the eightt, if math is to be believed, year tradition of writing up a “predictions” rambling for WrestleMania. And. Depending on the mood of the year, I’m either TOTALLY PUMPEWED`1  Or I’m regretting being a wrestling gan in the first place. So. I mean. This year, the thrity-fifth annual, WrestleMania , sjhould be no different. Right? All things considered and everything.

Also. Much like last year (when I went 4-10, again, if mathc is to be believed), I’m adding matches here in ascending order from how little I care for the matches, to how much I’m looking forward to them. Right? I think that’s how words work.

I’m still not Dusty Shull (still, the worst human being on the planet, Dusty is the Toby to nt Michael Scott, forreals). So. I still don’t care about 205 Live and such. So. Uh. Murphy’s held it long enough, right? Let’s go with Tony Nese?

RANDOM SIDENOTE: What’s worse? Having yourr battle royal upset, 10,000 people, AT MOST, by naming it agter an allegeded female wrestler pimp? Or having your trophy be a golden effigy of a diagram of a vagina?

RANDOM SIDENOTE II: WE DID IT REDDIT! Thanks to Reddit, someone already confirmed what I was thinking as soon as I first saw the image of the “woman’s historic histyory of every woman ever battle roal” trophy last year. The latter link there will explain.

Both of these battle royals are pointless. BUT. Battle royals are, if NOTHING else, fun as hell. If they weren’t delegated to the preshow, they’d be ranked higher than AT lEAST the nect match.

One of the SNLW “Celebrity” persons is goign to win. And. Lacey Evans is going to elimate Auska at the end. Because. Obviously. Going back to the former prediction. “Celebrities” don’t lose at Mania. So. Obviously. One of them, probably the white, “heel” one is going to eliminate Braun Strowman.

Dude. I’m STILL hoping for SOMETHING to happen to make this match not happen. I know, I know, I know. This is one of the RARE occasions where I agree with, pretty much, everyoe. Kurt Angle’s LAST match CAN FUCKING NOT be against the most boring wrestler, legitimately, ever (MERHAPS  Tom McGee, aside). But yeah. I’m still hoping John Cena interpts Elias Sampson’s musical erformance. Where. You know. Elias Sampson is given the I dunno, Flo.Ri.Da, or whatever his name is treatmet. Right. Elias is performing. Cena kicks the shit out of him for a minute. Doing an AA off of the WM stage. All that, right?  Cena goes to the ring, and says:

oR. You know. Something MUCH more PG. To which, Baron Corbin cuts a borin ass promo, as per usual, down the massive ‘Mania ramp, enters the rigng and is like:

Hey, fuck you Cena, go back to Hollywood, or whatever. Um.

Again. Something MUCH more PG than that.

Cena kicks the shit out of him easily. Proving that he still has RUUUUUTHLESS AGRESSION`1 And such.

Angle ginally comes out, admmits the error of his ways in choosing Baron, the boringest cunt ever, Corbin as his last EVER opponent. And ding ding fucking ding. Amazingness ensues and Kurt Angle returns the favor. John Cena beats angle.

You know. Since we live in reality. Where. You know. We CAN NOGT have a new Undertaker. None of this is going to happen. Aside from the first part. John Cena is going to make Elias Sampson job out to him once again.

And. You know. Barron Corbin is going to make Kurt Angle tap out to the ankle lock anf shit. Because WE aren’t ACTUALLY “The Authority.” If WE were, this shit wouldn’t have progressed this far. Forreals. Corbin’s going to beat Angle. Again. Get used to it, Europeans atteding the Raw after ‘Mania.

I mean. apparently. Merhaps. This match isn’t going to happen? Because? Injuries? Or something? Apparently, Mysterio actually injjured hiself on Raw. So. Whatever. Whatever happens. Rey wrestles, or his replacement happens on the pre-show. Samoa Joe is going to win. I mean. HAS TO. Right? 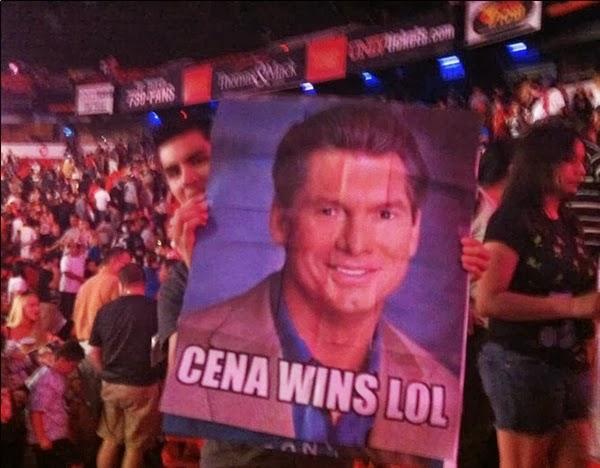 I mean. You know what I mean here, right? I mean. It’s obviously.

Hate me as MUCH as you want. But. Forreals dude.

I’m NO WHERE NEAR.

Convinced that Roman Reigns‘ leukemeia wasn’g a work. EVERYTHING was WAY TOO GOD DAMN CONVENIENT. From EVERYTHING … RNDOMLY working out for him to shoot Fast and Furious: Rock and Statham, to… you know… OH WOW, DEAN AMBROSE IS FOR SURE LEAVING!

NO. I’mmm not on about, “LOLz, why does he still have hair?!” Or ANY dumb ass bit about it. But. Forreals. For Leukemia to go into remission, it’s supposed to take 2ish years.

But whatevver. I’m a cunt. Legit.

We’ve seen this match HOW MANY imes now?

And yet. “We’re the Authority~! NOR MORE REPAET MATCHES~@” And all that.

Wait. I forgot. Fin Balor is “The Demon,” now. So. This match is TOTALLY different. My bad.

All’s i’m going to say is. As much as I, legitiminatly, LOVE Ricochet. If he and Aleister Black win here. I’ma shit myself. OK?

So. I mean. I REALLY don’t care about this thrown together piec of nonsense. I eman. The ONLY legit tag team here is The Usos. So.

No. ANYTHING involving Sheamus wil FOREVER be illigimated and shit.

Thee only LEGITIMATE tag team here is The Iicoonics. THey’re THE ONLY ONES missing a “&,” for cunt’s sake. Right?

EXCEPT. For Ronda Rousey’s inclusion.Sure. Her promo’s aren’t great. Hell. This whol, “I’MAHEELSOIDOPROMOSLIKETHISCAUSEI’MACTUALLYLEGIT,” thing is horible. And. It. Basically. Does the opposide of, “hide the negatives accentuatie, the positibes.”

But. Basically. This is now a “WINNER YAKE ALL~!” sO. Even the “WhatCulture positive spin” is null and void. If THE FOAL was to have “ALL FOUR HORSEWOMEN HOLD UP TITLES AT THE END OF THE SHOW~1” That’s all gone now. I guess. We’re just gonna see Becky, Bayley and Sasha hold up gold? And there’s, kinda, no brand extension ending? Merhaps? Whatever. Fuck WWE for ruining the new Undertaker that is Asuka.

You know. Since I’m doin this rambling in ascending order and all that.

These last four were HARD to choose from. Legit.

I struggled. Hell, I even put that last match too high, all things concidered.

All’s I’m saying is. From here on out? Again. These are the matches I’m most looking forward to. TEW’s “perfect show theory” and bullshit are all out the window. Alright? Of course “Mania is going to end with Becky Lynch holding both championships and shit. Because, that’s, apparently, what, “we all, ‘as members of “the authority,”‘ want!” And all that. Right?

This bit here. Is what I care about. what I’m most looking forward to.

And. Honestly? All of these can go in any way imagineable. BEcause. Vince McMahon is a crazy person.

And. One last time, let me reiterate… it was HARD AS FUCK for me to put these in their “ascending” order. Right?

That are deemed the “FEEL GOOD” ones, right? The Women’s triple threat fiasco, exists. the match for the WWE title exists. And this one.

I’m RELLY TORN on which one of the two (yes, there’s three matches, but THESE two) is going to be the disappointment.

The SMART money is on Seth Rollins willing. But. Dude. The smart money, last year, was on Roman Reigns winning. Because, you know, Brock’s going to UFC again and such.

And we all know how last year turned out.

The pny reason why this match is higher than the previous is because “Falls count anywhere.” Which means, hyou know, it’s going to be a fun match. Right?

Fun matches. Matches that I give a shit about…

These are basically the same thing. Right? Obviously.

ON TOP OF ALL OF THAAT…

This is a DAMN hard match to predict.

Obviously, the smart money is, Miz wins. Because. Obviously. ACTUAL wrestler )if Miz could be called an “ACTUALS WRESTLER”) goes over the boss’s son. But. Forreals?

Shane McMahon is going to win. Because. Dude. That’s the ONLY way this story progresses.

Trips’ carrear’s on the line. As if that means anything anyore.

EvenMORW fun than the Shane/Mixz bout. This thing is GOING to be filled with AWESOME “WrestleMania Moments,” akin to Mr. McMahon slowly raising his bloodied, smiling face aside the ring’s aprpn during his match again Hulk Hogan… this match is going to be filled with those extra special moments.

I cluld flip my Two-Face coing and decide who’s going to win this one.

Batista is gpoing to win.

Think on it, right? Trips goes into the HOF the night before as part of DX. And such, Batista’s going on to make a few Avengers/gaurdians movies. Right? Neighter of them could aske for  better “last match.”

Again. This match WON’T be an Owen vs. Bret technical masterclass. But it WILL be a Hogan vs. McMahon masterclass of psychology. Much like ‘The End ovf An Era” match with Trips and Taker was. At XXVIII. Right?

Anf. Now. Levit. THESE were the two HARDEST matches to pick,

This one? Honestlhy? It’s ging tho be THE “SLEEPER” of the night. THIS WILL BE the Savage/Steamboat. I think. Styles is capable of working a match against a dead kanine, even though last year’s “dream match,” may speak to the contrary,

Randy Orton. Who was, OBVIOUSly, THE…. what? Charlotte Flair/Becky Lynch of his time as far as overratedness is concerned has proven himself to be one of the more capable workers. As proven by… uh… I mean… his Rollin’s match was good cause of the “RKO OUTTA NOWHERE~!” And also… somethign about CM Punk, happened once, I think?

I know. I’m being a dick. But. Forreals. This should be the best match of the night. especially considering we’re not given any sorta ladder match or anything that could get TOO crazy (yes, last two matches mentioned have obvious craziness assigned to them, but I mean… the “CRAZIEST~!” thing we’re going to see is Miz diving off of the seven foot high ‘Mania entrance ramp onto SANiTY once again, right?) this is going to be a chemispheric masterpiece. I’m not sure what I’ve got to base this on.

Randy Orton is going to win. Because. You know. Vince McMahon is a crazy person. Basicallt.

This is “THE” match I’m most looking forward to. I guess?

This is. PROBABLY the match that’s going to be a disappointment.

The ONLY… LOGICAL way that this ends up with a Kofi Kingston win is due to the upcomg Saudi Arabia show. And Bryan’s potentential unwillingness to work it.

If WWE were smart, they’d run with this. They’d acdntuate. the fact that Bryan’s not going to go there. Make him a BIIGGER “COWARD” HEEL.

“I WON’TE GO TO THE REGRESSIVE SAUDI ARRABIA WHOSE ECONOMY IS BASED ON FOSSIL FUELS!”

And. You know. REALLY push the heel narrative that Bryan’s been doing.

But yeah. Lesnar HAS  to lose the title.

Kofi Kingston doesn’t HAVE to win.

Best way to end this WAY too long of a mess, innit?