So. Yeah. We last legt our adeventure with “SmackDown vs. Raw 2008.” Becaus. Dude. That was the last wrestling vdieo game I REALLY played for like. A LONG time. Hell. This was the last video game I purchased, period for quite a while.

Because. Moneys. Stuffs. Economy. Me being a lazy cunt. All of these things. All of their pweres combined and I ended up needing to sell my X-Box 360. So. I didn’t play any video game. For a qhilw. BUT. I’ll try and comment on a couple of things from this point (SmackDown vs. Raw 2008 till… you’ll find out). But. Yeah. This is the dark age of wrestling video games. undoubegtdly. Not just due to my exodus from video games. But. Because. There isn’t anything worthwhile, really. I’m sure there are SOME exceptions, but… yeah. We’re going to get into all of this.

Honestly? I created, you know, Uncensored.

I kicked my nephews’ asses in Royal Rumble matches a fw times.

Now, I remember this was THE game where jukes and the like were all on about, “OMG~! Tag team matches are gonna be cool now~1” And. I mean. I can’t confirm or deny this. But, I mean. From SmackDown 3008 till thr current crop? Yeah dude, Tag matches hae been improved immenselesy. Right? I mean. The fact that you can now do shit on the apron is a gigantic improvement. Right?

And. My first, “official,” midnight purchase (on the same night as… whatever, dumb, Assassin’s Creed, thing) happened. And I picked up…

This was the first game since, technically 2007, that I purchased and played, And dude. I’m serious. I loved it.

Sure. By and large, matches, tag team aside, have remained almost identical. But. There were still some upgrades that were awesome. “OMG! Moments,” and such were a nice, awesome touch. And. I mean. I couldn’t help myself then to delve into the thing I just, semi, complaiend about in this rambling, “Create a Story.” I created a bit of… something, titled, “The Internet Darlings pt. 1.” I mean. It was a month-long story that culminated with you needing to win the Rumble as CM Punk. And like. It started with John Cena… being John Cena. Fighting Alberto Del Rio. Stuffs an things like that.

Alls I know is, I did something instresting. Including having you to win the Intercontineltal Championship as Santino Marella. ALL THE WHOLE FUCKING WHILE, the name, “Santino,” was censored by the uploading gods. Somehow.

There was also this side quest. Where you had to play as Zack Ryder (especially, since you know, he was the OBVIOUS, Internet Champion at the time). W inning the U.S.s title as Zack Ryder was a thing, including having to win a match on Main Event as Ryder while, like, your health meters are all red, and eventually you win back )in WWE canon) the U.S. Title. And shit.

Basically, it was all leading towrds this faction called the Internet Darlings, whom I made an AWESOME logo for, because, lest you forget, Create a Logo was available in 2k14. Basically. You’ve got a “D,” right? You cur off that… “back” of the “D,” and put a box in its place. Think: iD. Right? And “Internet Darlighns” read below their logo. The story didn’t progress this far. But. The members of the Internest Darlings were: Daniel Bryan, CM Punk and Zack Ryder (Merhaps Santino Marella was in there too because I’m me, I’m not sure+.

Basicaly. If. Somehow. You have a PS3, and, somehow, the servers are still working, search for, “Internet Darlings,” in the CC bit. Right? You’ll find it.

I played many-a created stories. Pretty much all of which were dumb, little things. But at least there was fun to be had. Much more fun than anything that’s happened afterwards. Basically.

Yu know. Outside of playing through 30 years of WreslteMania and all that. Playing through, quite easily, the “ULTIMATE BOOSSS~!” mode that was “Defeat the Streak.” And all that. Either way. From the sheer creative standpoint alone )aspecially what we’ve been given since_.

RANDOM SIDENOTE: This was the first gamme,in the history of ever, that I ever purchased a “season pass” for. So. Congrats with your… Me knowledge.

WWE 2k14, is EASILY the best game, that I know of, in this… the modern dark age of wrestling video games.

This happened. I guess.

And. I mean. I’ll be honestl, I only rented this for a day at RedBox for PS3. Right?

My experience? Total shit. YOUR experience? Being that it was the first game on “OMG~! THIS GEN`1 OMG`!1 WE SO MUCH NEEDED A NEXT GEN TO MAKE THIS GAME HAPPEN~1″… apparently, ya’ll agreed with me, either way.

I mean. On the BASE PS3/X-Box 360 version… you get NOTHIng but an updated roster. That’s it. Oh. And there’s an “Who Got NXT?” Mode. Where like. You play the 2k15 showcase mode thing. But.. only a couple of times. As NXT guys. And then. You gotta face John Cena in “beat the streak” mode from the previous year. All the while. “Create a Story,” “Create a Logo,” and, without doing any research… I’m just generallizing… more match typers weres also lost.

And. I mean. Again. I haven’t, ever, heard good things about the “OMg~! TOTALLY NEEDED~! NEXT GEN~!” Version of the game… in 2014, especially in regards to “MyCarreer” Mode.BUT. I mean. At least you greedy, “next genners” HAD a MyCareer Mode. Or whatever. 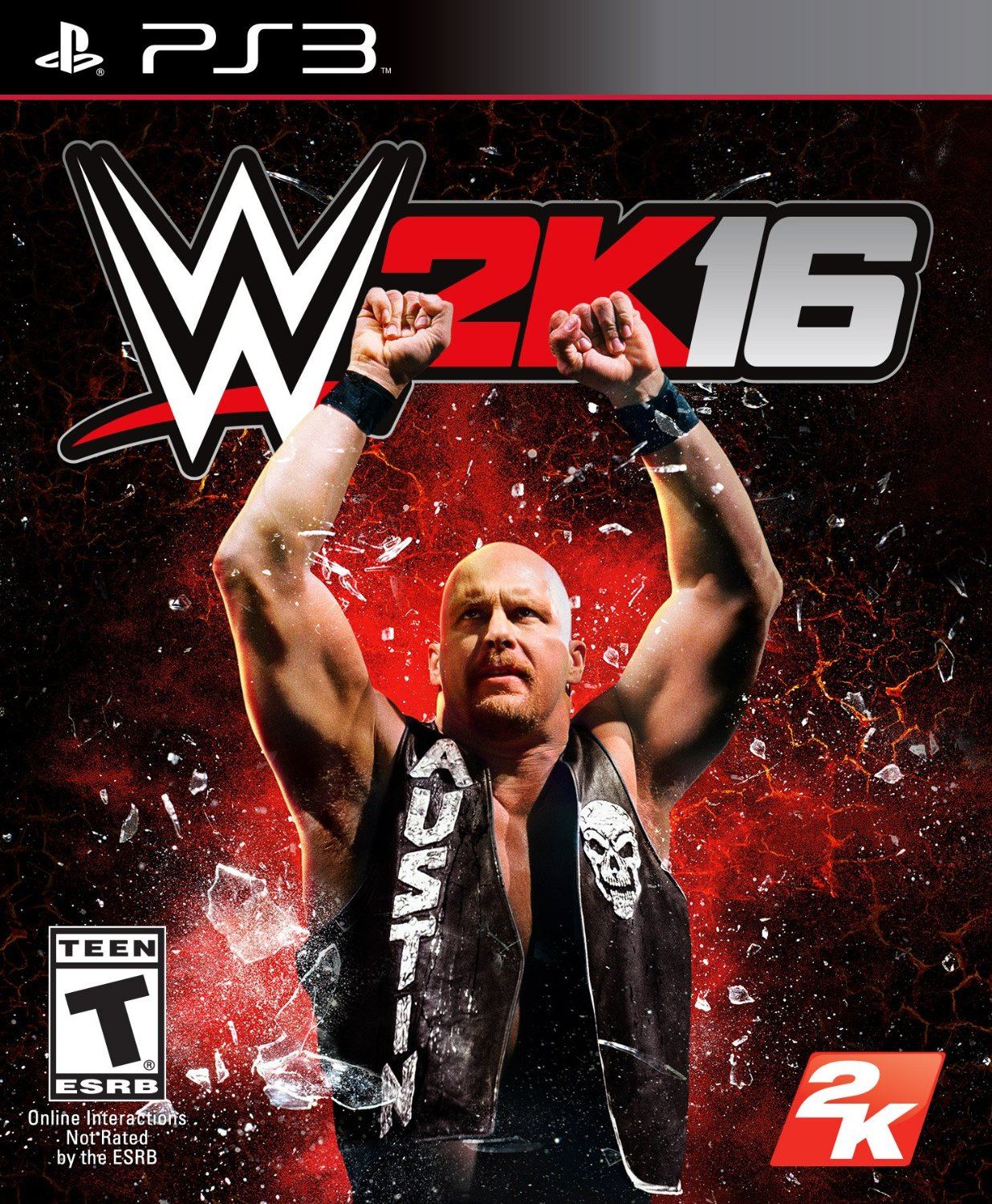 And. Despite everythings I just said. I ha d myself a PS5, just agter the release of this here wrestlng video game. And stuffs. and things. And words.

And. Forreals? This. Legit. Is probably my favorite wrestling gae of the… especially MODERN wrestling era. Really. 2k14 takes the cake. But. I mean. MODERN? THIS gen? Yeah. 2k16 was the best for me. Of “this gen.”

And really I can only tell you that I loved it because it made CAW easy. Like. They had pre-made faces, and I could make something awesome out of them. Something I still can’t do. Because. Forreals. I can’t do this. At all (mofre on this in a bit, I guess).

Really? Rhe only thing I gave a shit about is that the “MyCareer” mode was kinda better.Again. Kinda. But. It was basically the same thing as the preious year. Only. This time. You had some sort of “Paul Heyman” twist… which… as much as I may love me some Paul E., this aspect made the mode from 2k16 FAR morw lame.

And. Uh. Yeah. That’s it. Tht’s the only thing worth note of this game. Oh. Merhaps? Pretty sure. But. Yeah. The “promo system” made its debut here. So. YAY! AWESOME~!

Pretty sure it happen ed in 2k17, but, either way (since I’ve got, muh, nothing else to say about this), backstagge things became a thing again. As did “fighting in the crowd.”

And. Honestly? As much as I hate to say it, because… I don’y know for sure, at all. But like. Merhaps, this could be one of the better “MyXareer Modes.” In this, the modern dark age. Because. Due. I didn’t finish it. I mean. I coudn’t. I had Uncensore made, and like, as good as he could be.

In this world of lootboxes and dumbness.

Uncewncsore, the “strong style,” wrestler… I gguess from Japan… some how… who was SO impressed by Baron Corbin’s appearance in the performance center….

I couldn’t make him go from #1 to winnin the royal rumble. in the career mode. So. No. I couldn’t and didn’t complete thr “official” story’d “MyCarrerr,” here.

So. I kinda gave up on everything 2k18 related at that point.

In this? The TRULY modern era… of like… the last fiveish years?

This was the first game I was psyched about since 2k14. Why? I dunno. I guess, I was hyped to have a, legit, Ronda Rousey character available. Pre-order. At launch.

So. Yeah. I did those things. Did the digital deleuxse pre-order edition and what have you. And. Yeah dude.

And. YEah. There were adjustments made to Universe Mod. Basically, they all pretained to titles. But yeah dude. Thsat shit REALLY mattered to me. Because. FFS. I WANT to have a Hardcore title on my shhows, AT BARE MiNIMUM right?! And. Yeah. FINALLY… there’s been more title alotments added to Universe Mod. But. Not much of anything else.Aside from some cool MitB. Things. Although, the “MitB” things, really aren’t anything TOO great either. So…

Uh. My career was cool enogh.

As was the Daniel Bra showcase, That first atch again Miz Fuck off that was hard. But yeah.

All I know is that I allowed muse;f )not due to ANYTHINg remarkable added to the overall game) or anything… just… kinfa. Me not bein “lazy” or something about this “czAW” Universe Mo. Where like. Uncensored was there. I created… some sort of version of my boyu, nVc.

Because. I was pretty easily able to manufacture some sort of awesomeness.

Legit? I still stand by thhe fact that MDM is, prbobly the greatest thing I ever created.

None of this matters.

WWE2k games will, continually go down this rabbit hole of “live service games,” with loot boxes. And doing nothing bt giving us updated rosters. With… MAYBE… a decent “story” mode kinda thing. But nothing else of note. As the games continue to be released year after year ageter year.

Throughout this series of ramblings… I went over, kinda, how games were released WITHIN THE SAME YEAR… and the games were DRASTICALLY improved on. And. We’re still dealing with, mostly the smme players as far as “SmackDown” games are concerned . We’re.. basically still dealing wit Yukes… or… the skeleton crew that @k engulfed.

Apparently. NBA 2k games are constantly amazing. NFL fans are BEGGING the Legue to drop EA and sign with 2k. And whatnot.

Some 2k representative person said something like, “for WWE 2k20, we’re going to do a massive update this time!” Or something.

No thanks, at this point, right?

I mean… WWF No Mercy will, undoubtedly hold the cake for awesomeness.

If for no other reason than this alone:

I mean… it’s basically what I said in “The Golden Age,” right?

The Future is: Sex Robots

When It Reigns, It Pours… My Thoughts on Royal Rumble 2015