Honestly, thouh? this is probably the worst SumerSlams since I don’t even know? 1993? And I mean. I have absolutely NO idea what trainspired that year. Like. At all. Hell. I barely remember what’s happened over the last… I don’t lknow… sevenoish yuears beforehand. But lilke.

This year’s SummerSlam has VERY little going for it. SummerSlam, of course is the thirdmost important WWE pPCV or evenish thing of the year. And I mean. offf the top of my head? I can think of Two matches that are a LOCK for the show. Like. I KNOW that two matches I’m about to go on about are GOING to happen. The reast? I’m just getting them from WWE.com. Obviously.

Basically. There’s only one thing that’s semi-important this year.

And it’s the main efent.

No. No. I have absolutely NO idea what’s going to happen during the duration of this match. I have no idea. None. Whatesoever. Obviously. This is the ONLY iunpredictable match of the night. As far asd like, “WHOA~!  IT CAN GO EITHER WAY~!” Kinda thing. Kinda. This REALLy is the only intriguing match of the night. Period. And like. It kinda sorta kills me to say this bu…
PREDICTION: The Undertaker gets the WrestleMania XXX vengeance. ‘Taker gets his win back. Or. Whatever. It’s hard to envision it. Cause like. When Lesnar gives him 10+ suplexes… I’m sue ‘Taker will have receieved at least ONE or TYWO concussions. But like. Whatever. As tough as a decision as this is… it’s the one that makes sense.

PREDICTION: Sheamus. Because. He needs. SOMETHING. ANTHYHING. ANYTHING to get himself… SOMEWHAT over.

Probably the biggest reason why this SummerSlam feels MUCH more lackluster than anyt other… we’ve got this match. Which. You kjow. is SUPPOSED to have the feeel of like OMG~! AWESOMENESS~! TITLE VS.s TITLE~! WINNR TAKE ALL~! But. No one. NO ONE give a shit. Because. You know. This is rematch from Raw. NOT EVERN from the Raw where Rollins vroke Cena’s nose. Legit.But like. How many times haves this match happened at this point? Legit question.
PREDICTION: Rollins/Double DQ/Something happens in which neither walk away with both belts/Cena wins because Superpan. No. That’s literally it. Nothing else needs explainding with my prediction. (Obviously, the first prediction there {“Rollins”} pretty much says it.)

The only things that needs saying here is…
PREDICTION: Ryback.
The end.
Kay.
Bye.

I’m just saying. It would have been MUCH better if Eric Rowan were healthy enough. But. I’m not a fan of Reigns in that fact that he’s the corporate chosen cunt that he is. I’m right there with you, internet. But like. I can’t be legit and keep a straight face. or something, without admitting how fucked up it is that he’s been downgraded to some shit he was doing back in like 2013. Just because we don’t like him enough. You know? Does he deserve THE FUCKING WORLD? No. But he doesn’t deserve to be devalued as much as he has been. This is a guy that (HAR HAR~! ARGUE~!) Main-E-FUCKING-VENTED WrestleMania. He’s been degraded to SummerSlam‘s midcard. Because. We were like. “Fuck this guy.” At the same time. Largely, I’d pin all of that on WWE Creative. But. Whatever.
PREDICTION: Reigns and Ambrose. Because. Duh?!

Most likely. This is going to happen on the pre-show. And. Most likely.
PREDICTION: New Day will win. Because. They’re the… LEFGIT. ONLY… even REMOTELY “over” tag team right now. So. Oyeah. And. It’s always a fatal-four-wauy match. Stop this.

So. Comic booky~! Thanks, Max Landis~! Really. OI cpouldn’t care less aout this match. Seriously. Nothing about it appeals to me. But. You know. CELEBRITIES~! APPEAL~! AWESOMENESS~! THINGS~! MORE VIEWERS~! GREEN ARROW!~ WOW~! AMAZING~! THINGS~!
RANDOM SIDENOTE: Seriously. Stop it with the “KING” gimmick EVER SINGLE TIME someone wins the “King of the Ring.” you know. Whenver they decide to do the tournament thing. Throughout MOST of the ACTUAL histoery of King of the Ring. There was… Off the top of my head… TWO people that REALLY worked the whole, “King” gimmick after winning the tournament. Those two being Savafge and Mabel. Barrett isn’t getting over. Sheamus didn’t get over. Fucking…. Regal didn’t get over. Stop it. King of the Ring is supposed to be a TITLE not a GIMMICK. Stop this dumbing down nonsense.
PREDICTION: Neville/Amell. Obviously. The celebrity never loses.

And awesoime match. If this was RoH in like… 2006. Or something.
PREDICTION: Meh. I could go either way. Honestly. But. I’ll just say. Cesaro. Just cause.

This is TOTALLY how I envisioned a “Diva’s Revolution~!” YEAH!~ AN AWESOME 3 vs. 3 vs. 3 match~! ~! BOOM~! IT’S ONLY GOING TO GET LIKE 10 MINUTES AT THE MOST ON THE SHOW~! YEAAAAH~!
PREDICTION: As far as this is concerned? Doesn’t matter. I’ll just go with Bellas because. They need some heat. Obviously.

Meh. Another VERY lackluster build-up. Mostly due to the fact that Dolph had to be off screen for so long to shoot some random, lame, straight to Blu-Ray movie that no one will watch. But.
PREDICTION: Dolph Ziggler will win. Obviously. Sopt it.

And… there you go. The most mediocre SummerSlam since 1993. Or so. Or something. Further proof is problable found on that “on demand” service thing rthat’s hawked all the time for an undisclosed sum of cash.

Yes. I did try to Mick Foley that. SDue me.

Again. The only thing that’s even SEMI worthwhile is the presumed main event. And I’m like. LEGIT afraid of Undertaker’s well-being and health. We’ll see how it all turns out, I suppose. Other than that? You’ll watch a show that’s barely worthwhile. Don’t get me wrong. Cena/Rollins will be good. So will Owens/Cesaro. But PPV? No. SUMMERSLAM quality? No. Nothing’s happening here that’s even worth your near $10. 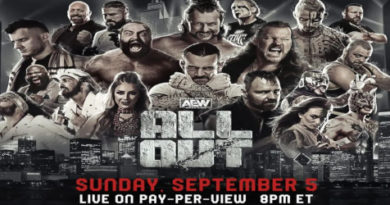