I’ve used the internet, social media, etc. very sparingly for the past week or so. Sure, largely that’s due to me not liking to deal with reality post-drunken rantings. But, for this week in particular, I didn’t want to know a SINGLE thing about Batman v Superman: Dawn of Justice before seeing it for myself.

Now that I’ve entered the depressurized atmosphere of the internet, I’ve been looking around and…

So, for this week, I will be discussing Batman v Superman: Dawn of Justice. In two parts. Breaking it down. Without MAJOR spoilers. Or – without spoilers that weren’t already revealed in trailers and the like.

For this part, we discus:

#1. Lex Luthor is. Bad. Kill this character with fire. NOW!

First and foremost, when discussing the bad aspects of this movie, I’ve GOT to mention, Jessie Eisenberg. His turn as Lex Luthor. Or Alexander Luthor. Or Lex Luthor Jr. Or whatever excuse filmmakers and such will give to his… version, thing that it is of the iconic Superman arch-villain.

This whole character. Is. Awful.

I don’t know where to place blame. Perhaps it’s Eisenberg’s performance. Maybe it was just a bad script, which could be the case in this aspect in particular. Zack Snyder could have given poor directing. I don’t know who’s to blame for this mess. But it’s not good. At all. There’s BARELY a flicker of hope that Lex Luthor could ACTUALLY be something decent in the future. But. It’s not enough. Get rid of this character. Now.

While I understand what Warner Bros. was trying to do, I have to agree with most critics. The plot is all over the place and it almost doesn’t make sense. I went into the movie knowing that Warner Bros. and DC were trying to set up the DCEU (or DCCCU as I called it on the Harms’ Way podcast tonight). Knowing that they were also trying to establish their Batman. They were doing all of this (AND MORE) whilst also trying to create an upcoming Justice League movie off of the bare bones of Man of Steel.

For someone like me? Having a deep (whilst not perfect) understanding of the comics, the characters, the stories, etc. It’s pretty easy to connect dots that weren’t drawn. For the average, movie-going American that’s just wanting to escape and see Superman and/or Batman punch each other in the tit for two and a half hours? The plot is going to leave much to be desired. I’m sure.

#3. This is, probably, the darkest movie I’ve ever seen.

While I am a fan of “dark” movies. Hell. I enjoyed Man of Steel a lot more than most folks. This is film is. Seriously. Just. Dark. Contextually. Visually. Everything. It is, probably, the darkest movie I have ever seen. The only movie that I can remotely think of that would even come close would be Sweeney Todd: The Demon Barber of Fleet Street. But that’s off the top of my head.

For me, it’s not that big of a hindrance (although I left the theater with the immediate thought that the movie was lifeless, but after the 24 hours hence and stewing about all of it, I’ve come to the conclusion that it has so much heart and soul to be found that it couldn’t be considered “heartless”) . For some, I’d understand how this film’s darkness could turn them away.

And for the love of ANYTHING holy. Don’t take kids under the age of seven-years-old or so, forreals, people. Just don’t.

*SOME KIND OF MINOR, EARLY/OTHER REVIEWERS TALK ABOUT IT AND CONSIDER IT NOT TO BE SPOILERS FOLLOW THIS, IF YOU WANT TO AVOID IT, SKIP TO THE NEXT PARAGRAPH*
Words written here so you don’t read any spoilers whilst glimpsing. Like. Entirely. Scroll down. Don’t read this. But. OK. Early on. There’s a scene where it appears as if Superman straight up murders some African terrorist that’s got Lois Lane hostage. But it’s explained sometime afterwards, Superman says to Lois, “I didn’t kill anybody.” I understand some confusion there. But oh wells. A bit later on in the movie, Batman straight up murders people whilst chasing them in the Batmobile. He straight up murders people in the Batwing/plane/whatever since it’s not given an official name (nor is the Batmobile for that matter). Batman damn near busts a cap in, at least one person. And. You know. It’s pretty lame.

There is killing in the movie. And it’s lame. It’s something that’s bad.

If you’ve seen Man of Steel you know that all of Smallville knows who Superman is. Or. You know. They all know that Clark Kent is “special.” And Lois Lane is also akin to this knowledge. If you weren’t a fan of this aspect of Man of Steel, then you’re going to throw up and diarrhea all over the place after what transpires in Batman v Superman: Dawn of Justice.

While I was inaccurate with about 99% of something I wrote some nine months ago, there was something that I was totally, completely right on the money. And, since, you know, I’m not wanting to go into direct spoilers. That past writing will be your guide.

Everybody. Knows. Everybody. And it’s stupid. And dumb. And it’s one of THE worst parts of the movie.

The dream sequences. Just. Stop that. They come out of no where. And while one was very well done, it’s a great way to confuse the hell out of an audience in a movie that has SO MUCH going on as it is. And also, there’s one dream sequence that made ABSOLUTELY NO sense. And it was a literal dream within a dream. THANKS CHRIS NOLAN!

How the “Batman v Superman” fight ends, is pretty lame. I’ll just throw that out there and leave it as is.

When Wonder Woman is first introduced, Gal Gadot is basically playing Anne Hathoway’s Catwoman in The Dark Knight Rises. But. She makes up for this. I promise. It’s just a weird little, plot thing.

The creation of Doomsday was a bit stupid. I’ll leave that comment there to linger.

Which, I mean, it kind of makes sense, with that thought in mind. Right? 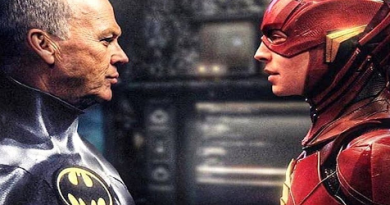 The Clowns. That Happened.