First and foremost… one thing NEEDS to be said. For the VERY first time here on RyansDrunk.com.

SPOILERS FOLLOW THIS.
Seriously. I’ve never done a review of ANYTHING before where I thought that a “spoiler” tag must preface. But this is an ongoing television series. Sort of. More so then anything else that I’ve ever covered before. Thus, throughout the words that I’m about to type, you should be wary of what you read afterward if you have yet to watch the two-seasoned series.

So… you’ve been warned. Here this rambling starts.

A primary reason towards my talking about NOTHING on The Drunken Radio Show last week had a LOT to do with this Netflix Original program. Seriously.

House of Cards distracted me from this real world that I, personally (as you do as well), live under.

During a time when people, such as myself, are entirely fed up with the way that politics work in Washington D.C., this Netflix program hit a total and COMPLETE bull’s eye for me and MANY others like me. And yet I’m sure that it appealed to other “political junkies” that do not subscribe to my ideals or political beliefs.

How could this be?

While I have my, personal, political views, others have differing opinions. Yet, at the same time, I’m sure that the “both” of us could relate and understand our political differences through this show. And I’m POSITIVE we would find a common ground of something that we absolutely despise about how the power structure of the United States government works. All whilst viewing a work of brilliant fiction.

Nine times out of ten, if you’re on the internet… and you reside within the United States (and, just about any other county in the Western world), chances are (statistically) that you fall more in line with the Democratic party more so than any other.

Hi people on the “other side of the aisle!”  But not really. 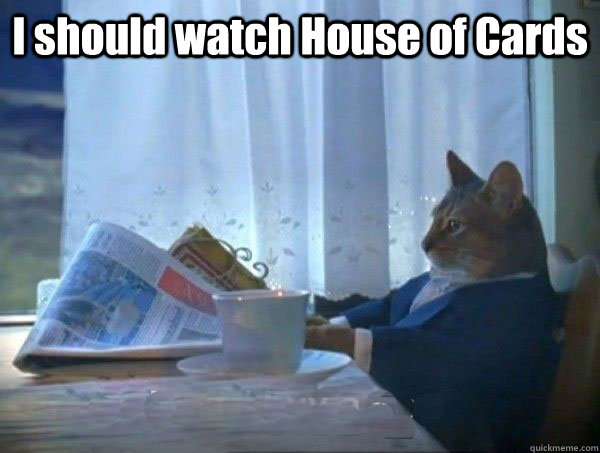 First and foremost, I love that a “mainstream” sort of medium had the intestinal fortitude to, “out,” the Democratic party as much as this show does. Seriously. The show’s main character, Frank Underwood (Kevin Spacey), is a Congressional Majority Whip in the Democratic party. He’s a manipulative asshole that you should NEVER find yourself rooting to succeed. Yet, you find yourself cheering for the character’s success. Each. And. Every. Time.

Whilst exposing how the political game in Washington may be played, I believe that the lead writer of the show, Beau Willimon, who has spent some time in political circles (at least, as far as I have, drunkenly, read) could, perhaps, be Freudian Slipping just how “evil” the Democrats truly are.

But. More than likely. This is nonsense.

I do accept and TOTALLY acknowledge that House of Cards is a work of fiction. Entirely. And completely. At that same exact time. It allows a window of doubt for ANYONE to create within themselves the question of, “Is this an accurate representation of how corrupt Washington is?”

But it’s much more fun to stir up hypothetical questions. Isn’t it?

It’s more fun to believe that Washington D. C. could be as corrupt as it is portrayed in House of Cards. But, with that token of thought, you MUST realize that a Majority Whip in the House of Congress has about as the same chance as I do of becoming the President of the United States within two years. Yet, House of Cards’ Frank Underwood was able to achieve such a feat.

If you’re a fan of the show… this image should ring a bell to you, even though this image came from our real, actual world. Instead of one found in the Netflix Original Series’ program’s storyline.

Here, in this image, you see President John Fitzgerald Kennedy signing the Equal Pay Act of 1963. It is an easy representation of how, in House of Cards, President Garret Walker signed an education bill. Vice President (S0mebody, and excuse me for not knowing this fictional fact,) Mathews was hiding in the sidelines while a historic bill was signed by the President of the United States.

While conspiracy theories can be had on both sides of the American political aisle, not much else can be a proven link between this show and the actual political landscape other than these revisionary images. While it’s amazingly fun to hypothesize how politicians could be as corrupt as portrayed in the show, there’s a certain fact that remains.

It is a certain fact that lingers itself above my mind whist I hypothesize these sorts of political (and, oftentimes, conspiratorial) arguments. It’s an argument that NEVER ceases to exist in my mind. This show merely proves my theory (the argument) even further.

Things CAN NOT be that bad.

Well,  largely, yes. You are right.

While it is indubitable that many proceedings found within the show, such as “pork spending” type of favors, happen across the political globe – murders, cover-ups “fake” rape scandals, and largely every outlandish occurrence housed within this house of cards are just that. Outlandish.

As much as I’m a “right-winger.” And I’d love to use this show to be the smoking gun of evidence about how “evil” liberal Democrats truly are. I must admit that this spectacle of story-telling is nothing more than an AMAZING work of fiction.

Seriously. From top to bottom. Every bit of story-telling that is viewed in this show is just… amazing. There’s no better adjective to describe it.

From the monologues that Frank Underwood gives into the camera, to the sudden glances he gives into the same camera as in to say, “Did you see what I did there?” Every bit of… damn near EVERYTHING. Is just… pure… amazing… story-telling.

And really, that’s about it. This is a great work of absolute fiction. Within it, it displays one of the greatest forms of story-telling I’ve ever seen.

So the question comes to the direct headline. Does this House of Cards crumble? As far as being an accurate representation of American government is concerned, pretty much. As a great form is cinematic fiction? Not. At. All.

Take that for what you will. As always. Kind of.

When you get what you ask for…